Sol705 - Interview with the developer of a fantastic app

Actually yes, but quite old :) I studied computer science back in the 90s at the university and I did some short games for home computers before that, especially in Assembly code for the C-64 and Amiga 500, but mostly as a hobby.

Managing time, without a doubt. It's really hard to predict how many hours a new feature or just finding a bug in the code could take. Some bugs are really easy to solve, while some others can vary from seconds to days. It's also hard to wrap up and stop adding content or making modifications, you have to be really careful about fall into those traps to get your product right in time and within the budget.

Land Patricio
Born in Buenos Aires (Argentina), Pat started programming as a hobby back in the '90s for the Sinclair Spectrum, Commodore 64, and Amiga 500. One of his early games was pirated even before being completed, and he ended up buying it without knowing! Even though those were really great times and with Sol705, he wanted to bring back those feelings of joy and madness after spending several years into game press journalism. His passion for adventure games, pop culture, manga, anime, classic sci-fi movies, cheap magazines, and model making are the main influences for Sol705 the point and click adventure that now he is bringing to Kickstarter. In 2002, he moved to Geneva, Switzerland, where he lives with his wife, his 3 kids, and a very bad cat.

If we talk about games, obviously I love graphic adventures like The Day of The Tentacle, Monkey Island, Sam & Max, and all those classics. Also the new point and clicks like Over the Alps, The revenge of Johny Bonnasera, and some titles like Resonance, Gemini Rue, the Blackwell saga, and many others. But I have to say that my heart really resonates with isometric adventures like we used to play in times of Sinclair Spectrum. I'd love to see more isometric games in form of apps! 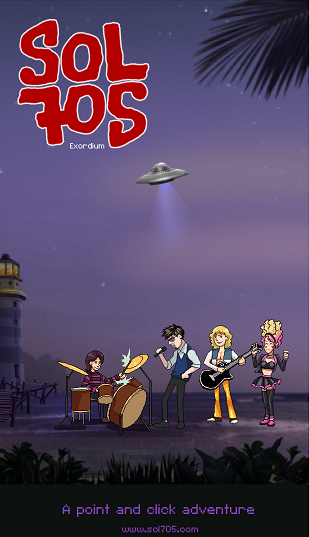 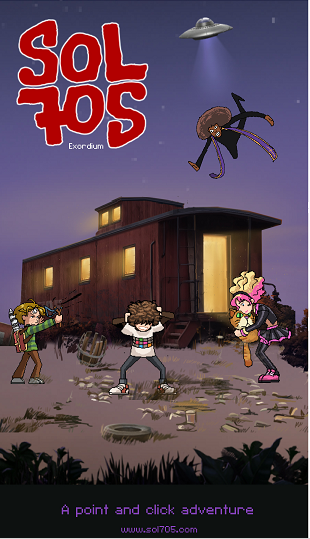 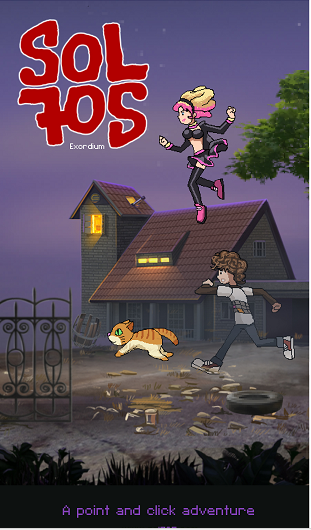 About two years, since the first animations and sketches started to look right to the full release, with a demo version in between.

I guess my audience is those players who still have fond memories of the classic graphic adventures as the Lucas Films and Sierra titles from the 90s. Also, women and people who don't like shooters or action games, that are looking for another kind of experience, storywise. Also, problem-solving and non-violent response to solve situations are important components to keep in mind when developing the puzzles or the different challenges.

To be honest, I don't think that my game is better than any other in this field, not in a technical way at least. What I was looking for was to portray some of my own memories from my local town back in Argentina during the early 80s but without the need to be historically accurate, to have some room to tweak facts, and keep the story light and funny. Many of the current point and click adventure games are too serious in my opinion. They try so hard to be deep and psychological and turn out to be obscure. Personally, I find them too pretentious and boring. On the other hand, I did not write such a complex story, I prefered to bring up some jokes and create enjoyable situations around them.

My idea was to find something fresh to the table. So I mixed some of my own experiences among other things I love, as the naive science fiction from the time of our grandparents, some technological achievements from the 70s that are now lost and forgot, and I put a special focus on the music, not only on the soundtrack but also on the heart of the story, having some real indie bands performing songs for the game.

It feels great when you got a comment from somewhere in the world saying that he or she enjoyed the game. You can't understand how this can be possible; it's something truly magical!

I spent almost a year developing the full version of the game, and it's now ready to be released on PC, Mac, iOS, Android, and Linux. This new incarnation keeps all the good stuff from the demo and it expands to a whole new level. Tons and tons of new hand-made animations, dozens of new characters and locations. I also managed to have some voice actor celebrities participating in the game and it will be available with subtitles in several languages.

Making games is very hard and expensive, in terms of real money, tears, frustration, joy, and, of course, endless working hours. You can put a big part of your life on it and everything makes sense when knowing that someone, somewhere had a good moment playing it. At the end of the day, it is all about sharing with others, so I would love to hear from you!

Join this hilarious point and click-free graphic adventure lead by a group of blockhead friends looking to break out from school and spend all their free time at their own secret paranormal research club: Sol705!

This winter’s holiday is the last chance to save hometown from total bore - doom!

Escape from Father Carlito's school prison and be part of this mysterious club starving for clues to find the truth behind this outrageous town conspiracy.

Uncover UFO sighting cases and the infamous relationships among aliens and your fellow citizens of Laguna Tucana...

But more importantly, help the boys to conquest the toughest and exciting peril of them all: ¡flirting with the girls of the local soccer team and get a dreaming date!

About developer: Born in Buenos Aires (Argentina), Pat started programming as a hobby back in ... Read more

Enjoy this classical novel ahead o ...