Yes. I began developing shortly after getting my first computer, a ZX Spectrum, on December 28, 1986. During the Christmas holidays, I learned the basics of BASIC. I was 13 years old. A year after, I moved to Z80 Assembler. In 1992 I got my first PC, an AMSTRAD 386SX; then discovered Pascal, C, and other languages. However, I never did any formal training in IT and computers; most of the time, it was just a very absorbing hobby. In fact, I have a B.A. in Biochemistry because Science was (and still is) my main vital and professional interest.

Notwithstanding my not-relevant education, I started professional development in 2001, as a website designer and web-oriented front-end developer. In 2003, I moved to SAP consulting until 2011. During those years, I did some interesting software R&D for my employer, among other not-so-interesting stuff, like recording invoices. Fortunately, during my SAP experience, I did many other parallel projects (e.g. look for “Saltacol” on the web), most of them were art and entertainment related, which helped me not to fall into insanity.

Then I discovered Android and fell in love with it. So, from 2012 to 2014, I became an independent Android developer before getting tired of wasting my eyes in front of a screen.

Summarizing: I started developing this app after investing a quarter of a century programming on many platforms in a dozen languages.

Technically, the horrendous graphic engine embedded in the Android platform, at least in those days. It was very quirky and the enormous fragmentation of the hardware ecosystem made things much worse. Therefore, I eventually developed my own graphic layer over the original Android one. I am not especially proud of it because later it became an obstacle for further development of the app. Especially when it failed in some Android 6 devices for reasons I still do not understand clearly. Fortunately, those problems are now gone.

Regarding logistics, the challenges came from my (supposed) supporting partner (yes, the Big G) that took great efforts to make developers unhappy. I do not want to talk much about it. Simply, I think none of you should put any confidence in that company. Indeed, it is completely beyond me; the fact that most people use the Big G-related browser, and they do it unconcerned about its huge privacy flaws.

‘Firefox’ is the best browser ever. ‘X-plore’ is a wonderful file manager. ‘Meteoblue’ is my favorite weather app. ‘GPS Essentials’ is the one I use for tracking my hikes.
But the truth is I do not use many more apps. As I grow older, I am becoming more and more analogic, and right now, I love to fill paper notebooks with a lot of colors and crazy calligraphy. 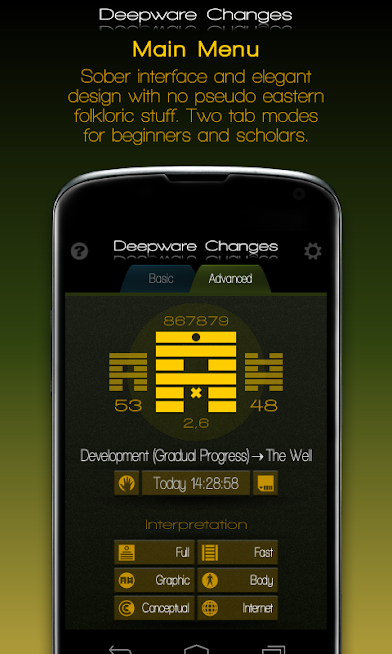 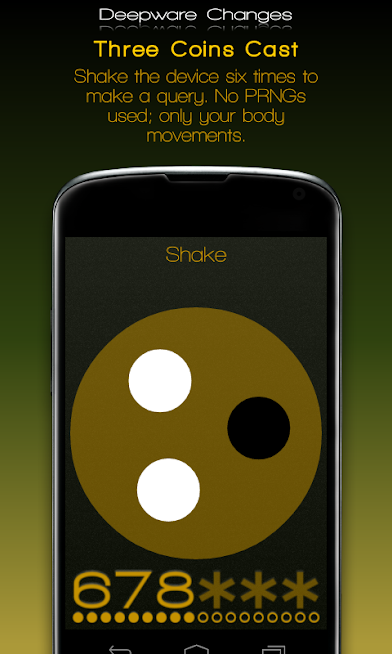 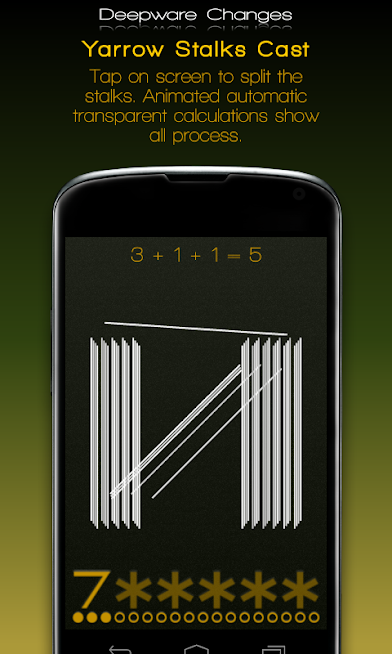 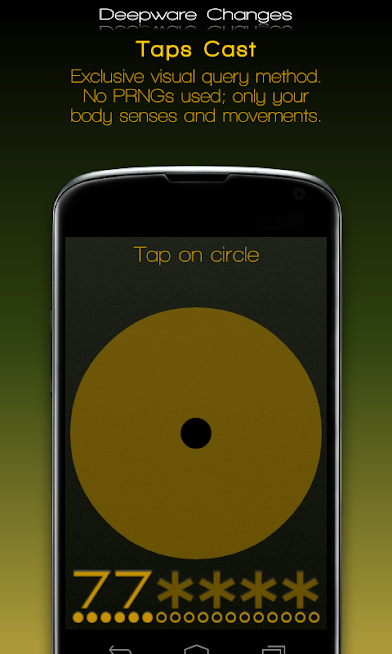 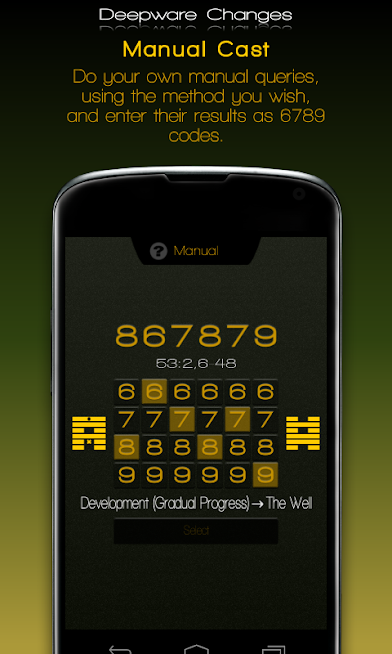 It is something hard to measure, because the essence of an app is only 10% of the effort (programming its kernel), and everything around it is the 90% you need to please its users. I am talking about documentation, video ads, and so on. In any case, just a few months for everything, working full time.

As far as I know, every other I Ching app uses PRNG (pseudo-random number generators). That is not the way the I Ching works. Having some background in the psychology of the unconscious mind (Jung, Reich, Lowen, Erickson, my own research and the very Book of Changes itself), I concluded a real I Ching app needs to read the user’s body movements.

Beyond that point, I also think that most other I Ching apps are made just because a ‘normal’ I Ching implementation is easy to do and can generate some cash: simply generate some random number, assign it a text, then bomb the user with ads... not forgetting a lot of pseudo-Chinese ornament. Not my case. I am an “I Ching Nerd” (as somebody told in a review) who has been seriously studying it since 1995. Indeed, some tools included in my app (e.g. the ‘sequencer’) do not dawn on casual developers, but they do on I Ching scholars. I also strongly believe the I Ching is far beyond the culture that generated it, so you will find almost no pseudo-Chinese stuff in my apps.

Coming back to the body-reading features in my app, after 7 years of UX, the fact is that every few days I receive emails from scared people that believe that Deepware Changes is… spooky. For me is just (fringe) applied technology. But I am not a sort of magician or guru. Actually, I hate that kind of imposture. I am just a normal guy with some unusual insights and a results-oriented mindset.

I refer to my previous answer.

Well, right now I am preparing public examinations in order to get a place as a science teacher (my current job) for the Spanish public education system. So, developing has become a secondary, even tertiary purpose in my life. I presume the day I find my app no longer works in my next phone, perhaps that day I will take the effort of making some retouches. But its development is totally stopped now. That is not to say that I do not have many ideas for it; actually, I have lots of them! I would like to totally redo the interface using Unity (a 3D engine, you know), to make the archiving feature far more powerful, integrate better text than the extremely poor ones I made, etc…

Clone it. Put a little token of appreciation for the original at the end of its credits. Do it bigger and better. Transform it in a timeless classic. Offer it as a gift for humanity.

Deepware Changes is a computer based on the I Ching or Book of Changes. These are the main features:
• Interfaces designed for a reliable communication with your unconscious mind.
• Original to-the-point texts in SIMPLE ENGLISH, adapted to the western mindset.
• Multiple tools for interpretation and analysis.
• Innovative concepts management systems for the exploration of meanings.
• Suitable for all kinds of phones and tablets.
• Sober design, no pseudo-eastern folkloric stuff.
• Sharing and export options.

Libro is a book-sharing platform that transforms your neighborhood into a library! Find and s ...

May be you want to learn a new and recondite(unfamiliar) word. Something that you might not u ...

June 14, 2019
e reference is an online library as an idealist project to help all people in the world to get b ...